YES! I want to learn more about property investments.

Here is a copy of the median sale price graph from the Lodge Real Estate website. 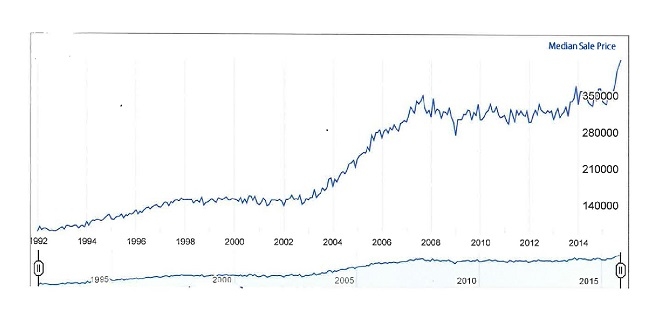 This shows how much the Hamilton market has changed in the last eight months:

So the booms are getting bigger in terms of percentage increase, but the flat periods are also getting longer.

Based on history, you would expect the current boom to go for around five years, so until March 2019.

However, the growth, or increase in value, has been extreme over the last eight months.  This would hint that the current boom will be shorter, as it should be impossilbe to sustain that level of growth for a long period.

My personal prediction?  Let me make it clear, I don't have a crystal ball, so this is just a guess, the same as any other person can make a guess.

From this, my personal prediction is that the Hamilton and Tauranga boom will peak in around 12 months, so approximately November 2016.  It will be interesting to review in a year to see how close I am!

The Auckland market could be quite different.  There is a large shortage of houses, as well as huge population growth.  So I believe the Auckland market must slow at some point as it has been booming for a number of years.  However, once it slows, it is still likely to keep increasing, just at a slower rate.

I hope you have found this article useful.  Keep an eye out for a further article coming up before Christmas that will suggest some strategies you could put in place around this, depending on your circumstances.

Latest from the blog

For further enquiries or to arrange a free 10-minute no-obligation phone consultation about
your situation and what Coombe Smith One50 Group Property Accountants can do for you, please email, phone or fill out our contact form.

We'd love to hear from you!